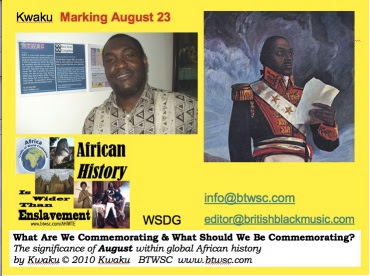 In light of some of the programmes I've recently delivered, it's good to see more individuals and organisations are marking August 23. In 2007 the British Government adopted the UNESCO-approved date as an annual day for reflecting upon the trans-Atlantic enslavement and its abolition.

However informed Africans object to both the colloquial term Slavery Memorial Day and UNESCO's term - International Day for the Remembrance of the Slave Trade and its Abolition, simply because it focuses negatively on Africans (as slaves as opposed to enslaved, etc) and does not sufficiently highlight their determination in fighting for their emancipation.

The preferred term is International Day of African Resistance Against Enslavement, because it underscores the significance of August 23 (1791), which heralded the start of the Haitian Revolution, the first successful revolution by enslaved Africans in the so-called New World, which directly led to the abolition of the trafficking of Africans.

In light of the UN declaring 2011 International Year for People of African Descent, I'd hope many more people will embrace and highlight this date as an important one within global African history.

But so long as it's given an African focus, instead of the Western spin of hapless Africans waiting for European abolitionists to emancipate them.
Posted by NAP at 02:21