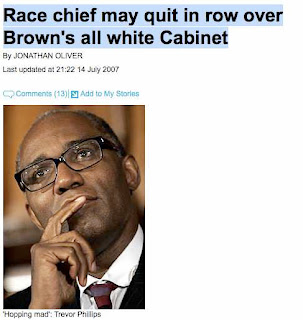 I read with interest the article entitled ‘Race chief may quit in row over Brown's all white Cabinet'* in the July 14th 2007 issue of the Mail newspaper.

Mr. Trevor Phillips, Chairman of the Committee for Equality and Human Rights (CEHR), is alleged to have threatened to quit in protest against Prime Minister’s Gordon Brown’s over all white Cabinet. He is apparently concerned that too few ethnic minorities and women have been appointed to Mr. Brown’s Cabinet.

I am confident that Mr. Phillips is aware that although it is a positive step to have ethnic minorities represented in Cabinet, it is even more important that those appointed to Cabinet or Committees, work for, and not against the interests of any groups they might represent.

For example, the mere fact that a person of African descent is in Cabinet or on a committee, does not necessarily mean that he or she will represent the
interests of Africans. A case in point is the commemoration of the bicentenary of the Abolition of the Slave Trade. According to information available, there were Africans including Mr. Phillips on the Advisory Group set up to oversee the 2007 commemoration events.

Sadly, the commemoration appears to have been largely used as an opportunity to deify William Wilberforce. Worse still, the 2007 commemoration events and publicity have on the whole, wrongly portrayed Africans as a group of amorphous victims waiting to be freed by Europeans. The focus of the commemoration was not on Africans like Nana (Nanny) of the Maroons, Toussaint L'ouverture, Dessalines, Sam Sharp, Cugoana and Equiano, to name a few who fought for the freedom of enslaved Africans. The commemoration was largely focused on William Wilberforce, and gave the erroneous impression that he almost single-handedly abolished the Slave Trade, and the efforts of others, both in the UK and abroad have largely been overlooked.

The CRE had the opportunity to set the record straight, promote race equality, and empower young people of African descent during its own commemoration event, which featured Mr Philips, by focusing on the resilience of enslaved Africans who strategised and organised rebellions to free themselves and their fellow men from enslavement.

The CRE commemoration event could have focused on the likes of Queen Nzinga of Angola who fought to ensure that her people were not enslaved, relevant readings from books of African abolitionists such as Olaudah Equiano, Ottobah Cugoano, or Phyllis Wheatley, would have shown how Africans used their writing to stir the conscience of the British public, and to demonstrate that Africans had intellect and were not merely passive onlookers during the Abolition process. Crucially, relevant readings from Equiano’s book would have demonstrated the difference between servitude in Africa, and chattel slavery under the slave trade, and helped dispel the myth that there was a similar kind of slavery in Africa. Sadly, the CRE missed
the opportunity.

I communicated with the CRE before their event to find out whether there would be readings from the books of African abolitionists, but I failed to get a definitive response. Nearly two months after the event, I still can not get a definitive answer as to whose readings were dramatised apart from William Wilberforce’s.

As the CRE Abolition commemoration event was put together under Mr Phillips’ watch, he could take inspiration from the adage “Charity begins at home”, and focus on ensuring that his new quango maximises its opportunities to promote race equality, which is not enhanced by failing to give prominence to the endeavours and achievements of African people.