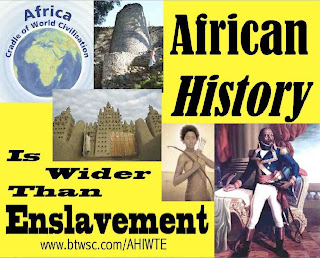 Twenty-years ago visionaries like Akyaaba Addai Sebo, who worked at the now defunct Greater London Council (GLC) as a co-ordinator of Special Projects, initiated the Black History Month concept in Britain. Black History Month (BHM), or African History Month (AHM)* as some prefer to call it, has its genesis in Negro History Week, which was initiated in the US by American historian Dr Carter G Woodson in 1926.

The aim was to highlight the contributions of people of African descent to world civilisation and humanity, which is marginalised by mainstream education, and often undermined by the media, so that all, regardless of their ethnic background, would have a better understanding of the contributions of Africans. It was also to raise the self-esteem of African youths, and to empower them to reach their full potential with the knowledge of the achievements of their forefathers.

However the lofty aims of AHM are seldom realised because many AHM events either focus on culture and/or entertainment, the enslavement period, or regurgitate the same world history centred around personalities mostly from outside Britain. Important as they are, we need to focus on history, and one that incorporates a British context.

Many people can name the likes of Rosa Parks and Martin Luther King of the US, or Mandela in South Africa - but how many notable Africans, barring entertainers and sports personalities, can we name from Britain?

We all seem to know about Rosa Parks and the Montgomery Bus Boycott of 1956, but how many of us know of Paul Stephenson and the Bristol Bus Boycott of 1963? Or Learie (later Lord) Constantine and his landmark ‘Color Bar’ legal case of 1943, after he had been refused accommodation by a London hotel. Do we know about the work of Dame Jocelyn Barrow^ in multicultural education and the efforts which led to the enactment of Britain’s Race Relations Acts, or the entrepreneurial flair of Dyke & Dryden, and the then teenaged Alexander Amosu, who developed multi-million businesses in hair and beauty, and ringtones?

Less than a month ago, she was in the news, but how many know that the most senior Government legal advisor Baroness Scotland is African? Few people may know of Dr Mark Richards, either because he’s in academia or because he prefers to DJ on a community radio station. He happens to be a renowned scientist, who also indulges in his passion for music. And over in Scotland, there is another renowned (but now retired) scientist, Professor Geoff Palmer, who is a leading authority on grain science.

These are just some of the role models we’ll be highlighting to help bridge the knowledge gap regarding African British achievers at the In Search Of Achievers Close To Home event on Monday October 19 in the Council Chamber at Harrow Civic Centre.**

In a week in which I have had to listen to teachers excitedly talking about Martin Luther King and “African dancing” as the highlight of their school AHM programme, listen to a talk of the African presence in Britain from Roman times to the mid 20th century which over-focused on the enslavement period, I believe all is not lost judging by an excellent video shown at a north London school where I made an AHM presentation. The video was made by Year 9 students aged 13-14 and focused on African British personalities and history.

Which brings me to a campaign we’re launching called African History Is Wider Than Enslavement (AHIWTE). If we want to redress the balance of a Euro-centric education and media coverage, we must meaningfully engage with and learn about African history, as part of mainstream history, and not focus on enslavement (or “slavery history”). Although knowledge of the enslavement period is necessary, and enslavement had and still has devastating effects on Africans globally, it took place over a relatively short period within our rich history, which began long before enslavement.

Teaching “slavery history” inevitably put the focus on the likes of William Wilberforce, who is mistakenly put forward as having ended enslavement, when in fact the 1807 Abolition Bill did not aim to end enslavement, but aimed to put an end to the trafficking of enslaved Africans from Africa.

Teaching African history, on the other hand, should highlight Africa as the cradle of civilisation with seats of learning going back centuries, such as the University of Timbuktu; architectural feats, such as the Great Zimbabwe stone walls and the rock-hewn churches in Ethiopia; and freedom fighters like Queen Nzinga of Angola and Tousssaint L’Ouverture of Haiti.

This is the first of two reasons for the AHIWTE campaign – to push for an education in and outside mainstream education which focuses on the length and breadth of African history, as opposed to just enslavement, where the African is often portrayed as either submissive or complicit, and Europeans are lauded for ending enslavement.

The second reason is to push for August 23 to be recognised as International Day of African Resistance Against Enslavement, rather than the UNESCO phraseology - International Day for the Remembrance of the Slave Trade and its Abolition. UNESCO chose August 23 in recognition of the start of the Haitian Revolution. As the only successful African-led revolution in the so-called New World, the date must be used to focus on the resistance led by Africans, and not remembering a vile “trade” or trafficking of human beings.

You can feedback on the AHIWTE campaign by going to: www.btwsc.com/AHIWTE.


NOTES
1 *AFRICAN HISTORY MONTH
The reason why conscious people now prefer the term African History Month is because when Black History Month was launched in 1987 by the likes of Akyaaba Addai Sebo, it aimed to empower Africans, particularly the youth, through positive display of their history and contributions to mankind. Not only was it squarely located within a global African and historical context, the launch also marked the African Jubilee Year. However in recent years, the aim has been diluted by turning BHM into a “multicultural “event, where other cultures such as Asian, Irish, Eastern European, are shoe-horned under the BHM banner. Whilst multiculturalism has its place, so too does African History Month, where anyone irrespective of race, can participate and learn about African history. www.btwsc.com/BHM_Projects.

3 BTWSC is a pan-London voluntary not-for-profit organisation which aims to develop potential, raise aspirations and promote social cohesion. Its projects are aimed primarily, but not exclusively, at people from socially disadvantaged or excluded backgrounds or areas. For more information: www.btwsc.com (About Us)


4 BTWSC has developed an accessible and OCN Level 2 accredited African history overview course. Overview Of African History: From Freedom To Enslavement To Physical Freedom can be completed over a few days or evenings, and qualification is upon submission of assignment. It covers empires, artifacts, griots, enslavement and the 1807 and 1833 Abolition Acts, African abolitionists and freedom fighters, diasporic issues, post-colonial Africa

^ Dame Jocelyn Barrow is one of 7 women featured in the BTWSC produced DVD What They Said I Should Be: The Story Of African British Female Movers & Shakers. www.btwsc.com/WTSISB.
Posted by NAP at 00:17